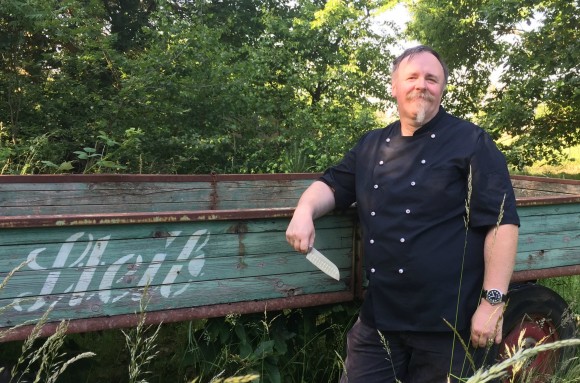 The first thing you notice about Klaus Hartmann is his marquee chef mustache and goatee. It is what you would expect from one of the Three Musketeers, curled at the ends perfectly. Right off the bat, you think to yourself “this guy knows his stuff”. It doesn’t hurt that he is tall in stature and has the compulsory chef’s belly. In one of my favorite restaurants, there is a sign that says “Don’t trust a skinny chef.” This is one of the reasons I trust Klaus unconditionally.

Chef Klaus has been beating schnitzel senseless and terrorizing eggs for over 35 years in such highly regarded restaurants such as the Hotel Post in Garmisch-Partinkirchen. Born in Baden Württemberg, he now calls Ramstein home and spends time in Karlsruhe as well. As I sat down with Klaus, the sound of a Porsche 911 thunders by and Klaus remarks “Porsche’s are great, but there is nothing like the sound of a 380 cubic inch V-8 Chevy.”

“Cooking with Klaus” is a roving cooking class that Chef Klaus brings to the homes of wanna-be chefs and weekend warriors of the griddle who are interested in learning the secrets from the master. I attended a class with my wife and four other participants in the kitchen of a friend hoping to touch up my amateur skills. As he dons his black chef’s jacket, he whips out a beautiful knife. “There are a number of great knife makers here in Germany, but the best knifes come from Japan. There are masters that will only produce a handful of knifes a month due to the extreme perfection in the finished product.” A chef’s knife can be related to that of a Samurai’s sword; it is part of them.

We were going to learn how to make German standards such as Spätzle, traditional German Potato Salad, Schnitzel and Apple Strudel. I knew this would be a great night once the Riesling started flowing. Klaus likes to have his pupils work hands-on, so we were right in there cutting potatoes and beating eggs. Hand-made Spätzle was a crowd pleaser. It is such a simple recipe (eggs, flour, salt, nutmeg and white pepper) but when homemade, it is delicious. One of the keys is to place the dough on a small flat wooden board, specially made for Spätzle, and shave it off with fast slicing motions so it falls into the boiling water and forms the right random shapes. Once cooked, move it into icy water to firm and then pan fry in a non-stick pan with butter until slightly brown. 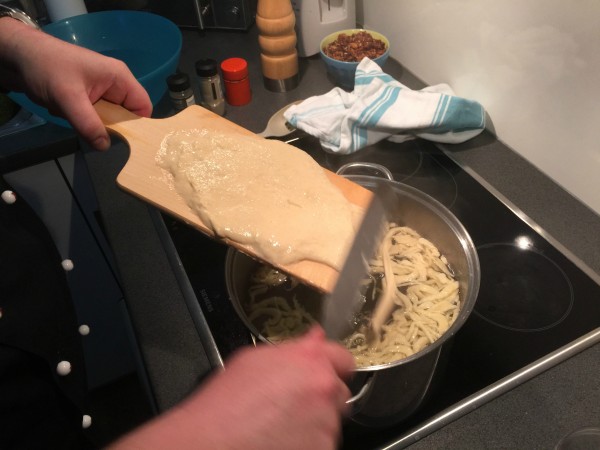 As the night rolled on and we heard about stories from Klaus’ Harley Davidson biker club days but as Klaus says “I was in the club for brotherhood and to ride. I’m too old for that now.” The schnitzel, which was made from veal, melted in your mouth. Klaus says, don’t cook it took long or it will dry out and become rubber. “I don’t understand why someone would make a breaded schnitzel and then cover it in gravy. You just make it soggy after taking the time to make it nice and crispy.”

Germany is famous for Apple Strudel and has always been one of my favorites, so when I heard we were going to make it from scratch, I was ready. Making the dough from scratch is a must. Klaus likes to include raisins in his recipe, but the recipe varies from region to region. When asked if he prefers cream or vanilla ice cream, he shrugged and said “I like them both!”

One of the bonuses of the cooking class was getting to eat what we learned about and it was nothing short of awesome. Everything had the right little hint of taste and texture, which made me realize when I usually cook, I am missing some something. 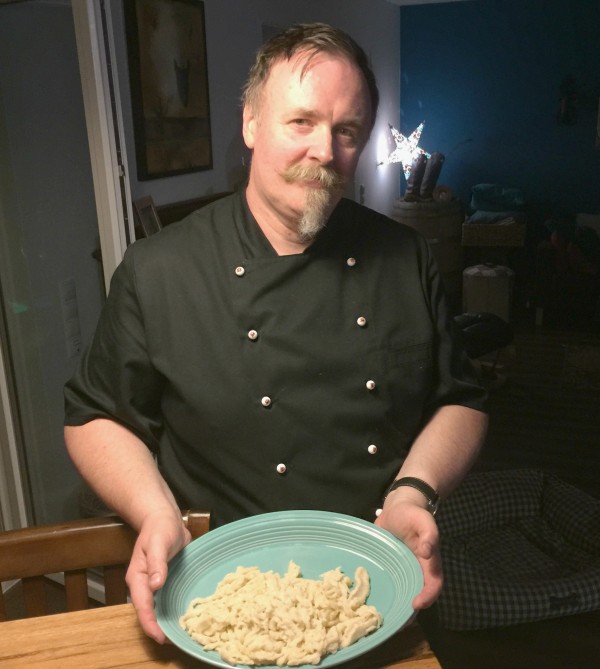 The “Cooking with Klaus” class was quite enjoyable and gave me something to shoot for in my own kitchen. Klaus Hartmann focuses his classes on German food for foreigners who want to learn the tricks of the trade. If you are interested in setting up a cooking class with Klaus, he can be found on facebook at www.facebook.com/CookingWithKlaus or via email at CookingwithKlaus@web.de.