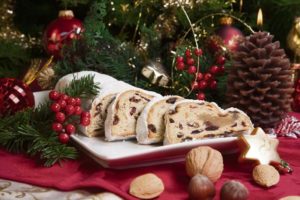 If you haven’t tasted it yet, go ahead! Stollen — or German Christmas bread — is a holiday season must-have. With almonds, fruits, and marzipan, this cake is a typical Advent delight in Germany.

The “Christstollen,” as it’s properly called in German, dates back to the 15th century. Originally, it was an Advent fasting meal in monasteries made from flour, yeast, and water. Since those ingredients didn’t provide much taste, Saxonian nobility asked for authorization to use butter, the use of which had been forbidden by church authorities. But, Pope Nickolaus V denied the request. Fortunately, six decades later the permission did come, and the Holy Father sent the “Butter letter” in 1491.

Ever since, stollen has become a popular cake. Today, you can find more than 12 different types of stollen in Germany, starting with the most known almond and marzipan stollen down to the red wine or oranges and Cointreau stollen.

Basically, many regional bakeries have introduced their individual stollen variation, so it’s best to try them for yourself.

Soak the fruit in rum for several hours. If you want to leave out the alcohol, use apple juice instead.

Pour boiling water on the almonds and leave them for 10 minutes. Then, strain and mix with the fruit. Mix 200 grams flour, tepid milk, crumbled yeast and honey into a pre-dough. Put some flour on it and leave it to rest and rise in a warm place until the surface starts to crackle.

Cut the vanilla bean open and scrape out the pulp. Add it to the pre-dough with the rest of the flour, 200 grams chipped butter, salt, grated marzipan, and the lemon zest. Knead it for 10 minutes. You can also use the dough hook. Once done, again leave the dough to rise in a warm spot for one hour. Cover it with a dry cloth to prevent draft. After that time, the dough should have doubled. Work it again thoroughly on a floured surface and mould it into a bread shape.

Once removed from the oven, spread it with melted butter immediately. Professional bakers recommend letting the cake cool down for a day before sprinkling powdered sugar generously on it for a thick coating. Store it in a cool place.