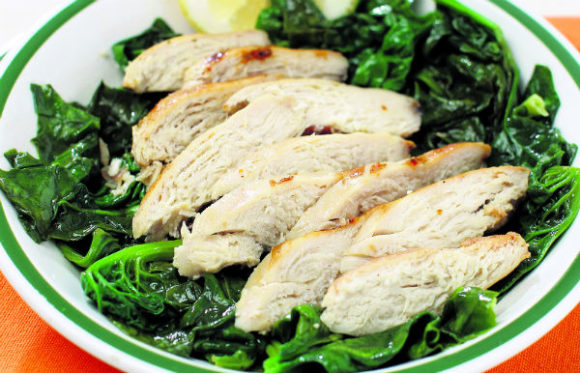 Wash spinach and allow to dry. Peel onion and garlic and dice finely. Roast bacon to crispy stage and remove from pan. Fry onions and garlic until they are glassy, then add the spinach. Let the spinach stay in the pan until it’s wilted and approximately half of its original volume. Set aside in a bowl.

Heat oven to 200 degrees Celsius or 175 Celsius in convection oven. Put oil in a baking dish large enough to hold all steaks, warm oil in oven. On the stove top, heat 3 tablespoons of oil in a skillet. Rinse and pat dry steaks, then brown in the skillet for about 2 minutes on each side. Remove from skillet and season with salt and pepper.

Mix cheddar, cream cheese, sour cream and spinach and season with salt, pepper and nutmeg. Place turkey steaks in the preheated dish in the oven. Divide the cheese/spinach mixture into 4 portions and put on each steak. Top with bacon and onion mixture. Place on broil in oven for 5-8 minutes, depending on the thickness of the steaks. A nice side dish would be a raspberry vinegar, olive oil and lime juice dressing on a lettuce salad with French baguette.

See you next week!