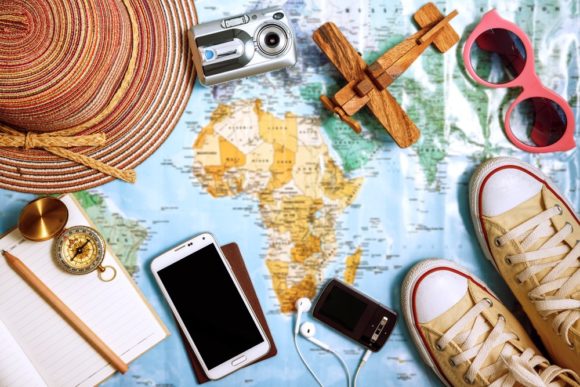 Blend in while Traveling Abroad

Whether you are new to Germany or have been here a while, chances are you’ve had an experience where you walked into a restaurant, bar, store, historic site, etc., and noticed that all eyes were on you. The proverbial music may have even come to a screeching halt (at least in your mind) as onlookers quickly sized you up and recognized that you are not a local. For those of you who want to blend in a bit better (it’s just good operational security, or “OPSEC”) as you make your way through your host country, here are a few tips, from one American to another:

Believe it or not, the United States is one of the noisiest countries in the world and Germans can often hear our countrymen coming from a mile away. Let’s face it. We talk loudly, laugh loudly, sing loudly, and even sneeze loudly…aah CHOO! We make a lot of noise in restaurants and throw loud parties at home. Somehow, we also drive loudly, showing off our huge SUVs, powerful muscle car engines, and great sound systems in the tiniest and quietest of villages. In so doing, we don’t casually mention that we’re Americans living abroad, we SHOUT IT FROM THE ROOFTOPS!

Being aware of the noise level around you can help you recognize when it’s okay to let loose (at a bar or soccer game) and when to tone it down a touch (at a restaurant or while shopping).  This not only keeps you from being easily identified as a tourist, but also helps show your respect for your host country.

Clothing choices are often a huge part of blending in. Have you worn shorts and flip-flops in December? What about to dinner at a nice restaurant? There’s no mistaking it, you’re not from around here!

Try leaving the summer clothes at home unless it’s actually summer and it’s actually hot. While we’re at it, ditch the workout attire, too, unless you are, again, actually working out. Instead, try putting on a more fitted pair of jeans, a scarf, and a pair of Chuck Taylors (aka Converse sneakers) to blend a bit better. Fellas – if you’re going to dinner, consider wearing a collared shirt and maybe even a sports jacket. For starters, the ladies will love it. Additionally, dressing for the weather and the occasion goes a long way when it comes to blending in.

So, you’ve passed the noise and fashion tests. Yet, you’re still not blending very well. It’s probably because the waiter just greeted you with “Guten Morgen/Tag/Abend,” and you just stared and said, “Huh?”  rather than returning a basic “Good morning/day/evening” greeting.

Chances are, you won’t master the German language with its die, der, and das complications during your 2 or 3-year tour. Still, you can buy yourself a few more moments of fitting in while simultaneously showing respect for your host country, its language, and its people, by learning a few polite expressions. Start with please, thank you, excuse me, yes, and no. Shortly thereafter, learn to count in German and ask basic questions such as, “’How are you?” and “Where is the [fill in the blank]?’” Later on, add something like, “Mein Deutsch ist nicht so gut. Sprechen Sie English? (My German is not so good. Do you speak English?)” This simple confession and question will get you a lot farther than jumping right into English here in Germany. People will appreciate the honesty and the effort, and will likely enjoy practicing their English with you. As it is mandatory to learn it in school, especially younger people will have no difficulties understanding you.

Germans are very punctual. If they say 2:00, they mean 2:00, not 2:10 or 2:15. Accept it for what it is and plan accordingly. Similarly, a rule is a rule in Germany. It’s typically not a suggestion or a guideline, but a rule. As Americans, we don’t like it when people bend the rules, but we love to have rules bent for us – in our favor. Well, that’s not so likely to happen here in Germany. More often than not, a rule is a rule here. Period.  That includes the speed limits (when posted, remember highways often do not have any), housing guidelines and trash regulations. If the garbage collector spots something in your trash can that does not belong there, he can decide not to empty it at all. Same goes for cans that are so full, you can’t close the lid properly: they are not obligated to collect any of it, if you do not stick to the limit you paid for.

In short, Americans smile at strangers a lot more than Germans do. We smile when we pass people on the sidewalk, when we enter stores, and at neighbors we don’t know very well. You won’t find that here in Germany. Germans are very friendly and very kind, but regularly smiling at strangers is definitely an American custom, not a German one. However, a smile goes a long way and you can never smile enough. It might just make someone’s day.

As you show more effort to blend in, be assured that you’ll see a lot more smiles from your neighbors and the like. Similarly, Americans tend to apologize and say “excuse me” far more than our German counterparts. If you’re in a German grocery store, and someone passes between the cereal shelf and you without saying excuse me just as you’re reaching for that box of Corn Flakes, IT’S OKAY! It’s the norm, and you shouldn’t take it personally. You have not been disrespected or harmed in any way. You have simply had the opportunity to experience a cultural difference.

Personal space varies from country to country. Americans like a lot of personal space (distance between bodies) when talking to others. Germans are okay with a bit less space. This is just something to be aware of so that you don’t back yourself into a corner by repeatedly taking two steps back to increase the personal space as your German friend repeatedly takes two steps forward to decrease the personal space. On the flip side, making so much noise in your house that your neighbors can hear it (particularly on Sundays and during “quiet hours”) can be viewed by your neighbors as an assault on their space.

Please keep in mind that all the tips mentioned here are based upon one American’s observations during many years overseas. These are merely tips from one American to another and should be taken with a grain of salt rather than regarded as the definitive word in cultural awareness and adaptation.

Remember, situations vary just as individuals vary. For these reasons, the final tip for blending in – or at least not standing out SO much (no matter where you are in the world) – is to simply observe your surroundings. How noisy are others (everyone is probably a bit louder at Oktoberfest), what is everyone else wearing, what words do others use and what sounds do they make?

What other cultural cues can you pick up to better fit in? Blending in is not so much about checking your national identity, pride, and customs at the airport. It’s more about showing respect to your host nation by trying to do things the local way. It’s also about practicing good OPSEC to protect yourself, your family, and other Americans in the area while being a good ambassador for your country.

Finally, blending in is about trying something new while you’re in a new environment, and, of course, decreasing the stares you get when you walk into the room. As you work to fit in, you’ll find that your host nation will honor your effort and welcome you with open arms, thereby making your time in Germany even more enjoyable.

Due to host nation regulations to prevent the spread of COVID-19, bookings and trips may be cancelled or postponed, and travel to neighboring countries may not be allowed. Please verify the status before making plans to attend. For U.S. government employees, including service members, remember to always follow command regulations, which may be different than host nation policies.