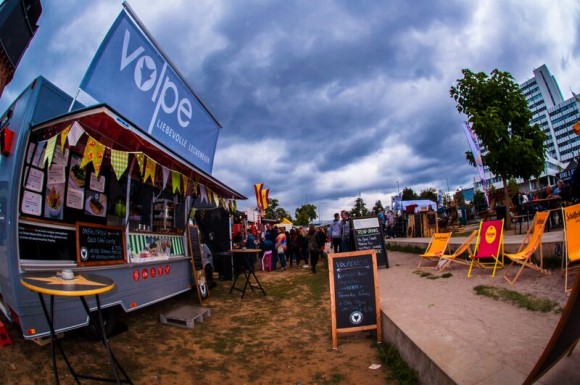 Calling all foodies! The Wiesbaden Street Food Fest is a place where it is publicly acceptable to literally eat your way across the fest!

The festival at the Wiesbaden Schlachthof is one of a kind! If you love the food at German fests, sometimes it is hard to search for something delicious through all the beer and wine stands. Well not at this fest! Here the food stand is king and I was the loyal servant on a quest in street food heaven! Companies from all over Europe, from fine dining to BBQ to Vegan, came to Wiesbaden to display their culinary works of art, one food stand at a time. 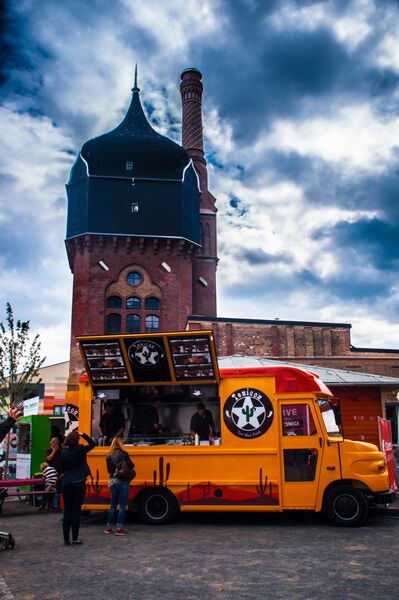 © Gemma
Man oh man, this fest did not disappoint.

Here are some of the highlights of what I ate and saw:

For my first stop I was looking for an appetizer type of dish. I had to pace myself and I didn’t want to overdo it right away! I came across a food stand from Berlin called Pan Kowalski. They offer a new food concept to show what pierogi’s are capable of when you fusion a traditional Polish pierogi with hip street food. It was delicious! It was a great balance of a fried dish but wasn’t oily at all and still felt like you were eating healthy. They were served on a bed of fresh grilled vegetables with an option of beetroot and horseradish sauce to compliment it. Check out their facebook page to hopefully catch them around Germany! 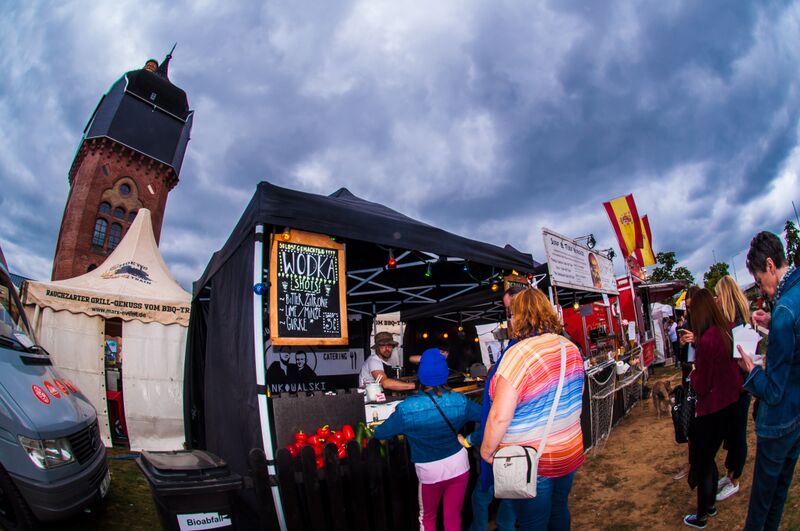 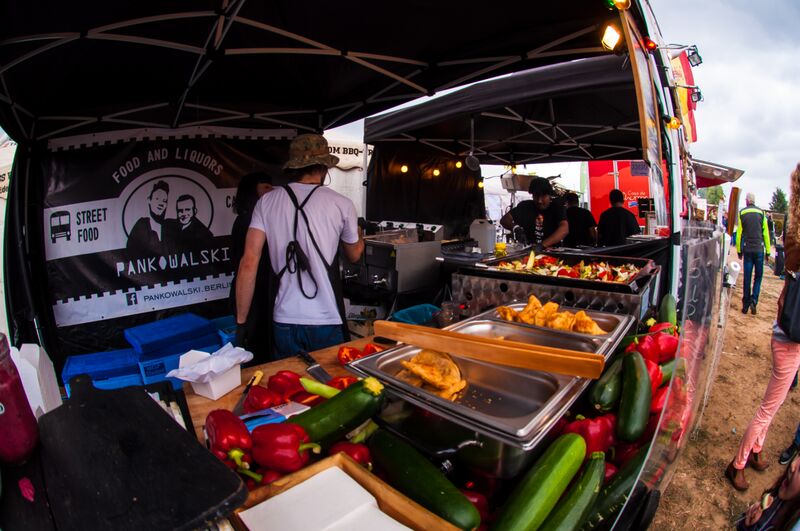 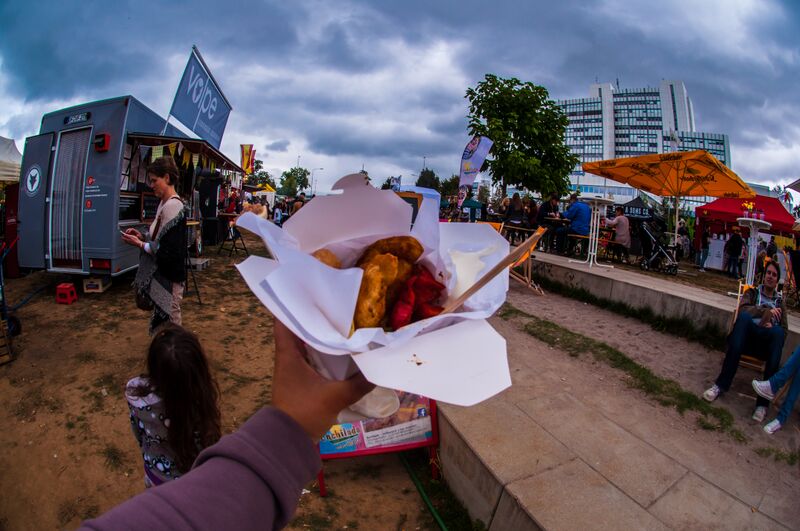 © Gemma
I really loved the culture of the fest. While I was eating my amazing pierogi’s we were listening to the cool Jamaican tunes from the Jerk chicken stand. 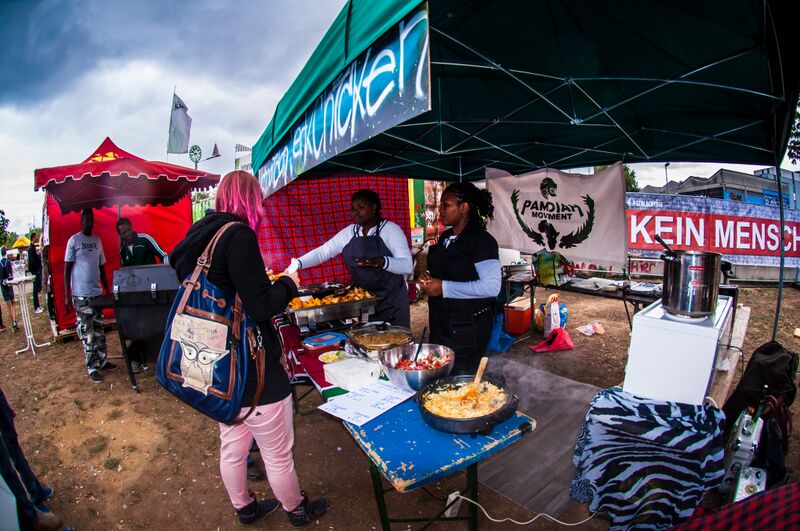 © Gemma
There aren’t many other fests where within arm distance you can get an American doughnut, some Asian desserts and Spanish churros. One of each please! 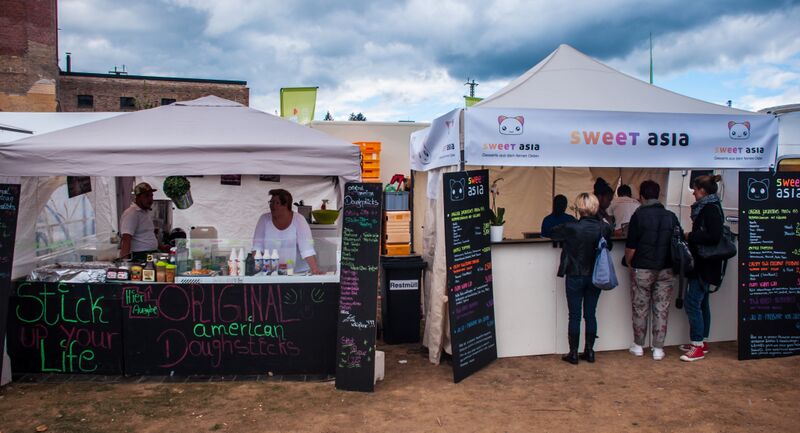 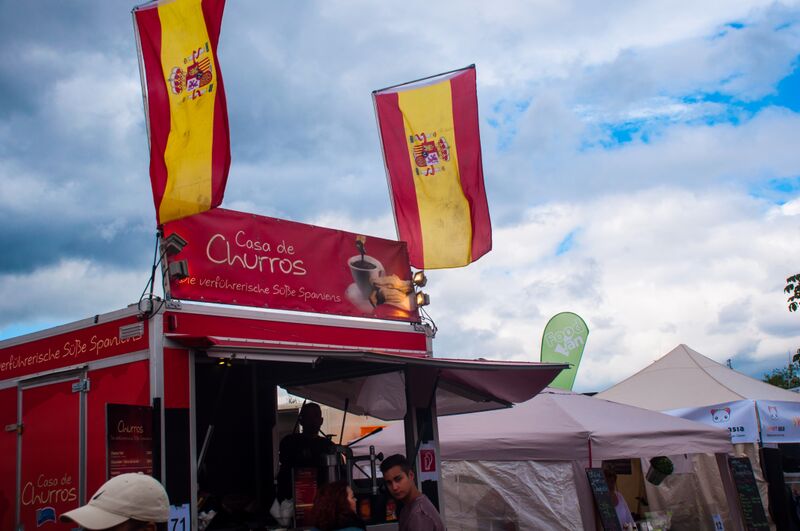 © Gemma
Inside the Schlachthof they had food stands as well as vendors where you could buy their products. 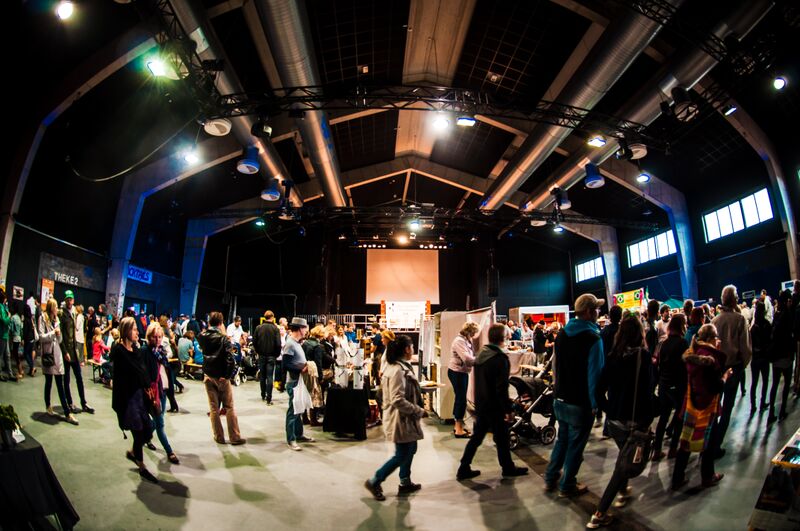 © Gemma
Music was really everywhere and it added such a nice atmosphere. What I loved about it was that there wasn’t a formal set stage and a list of bands, they would play in any area that looked like they needed some music! This Dixie band was just too cool. 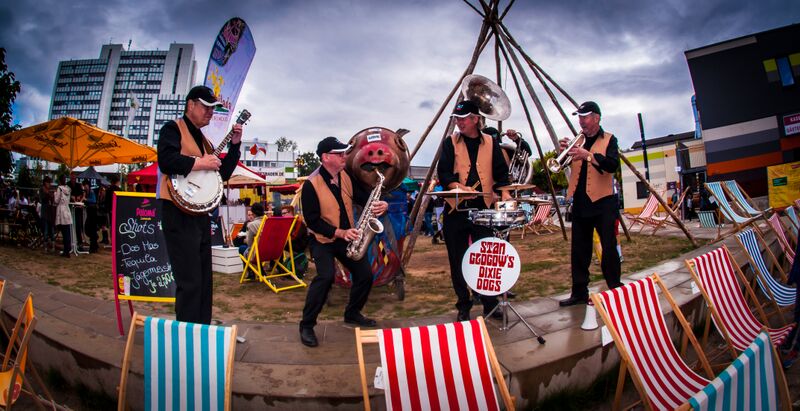 © Gemma
“Nope, nope, nope”. That is all I said while walking past the insect stand. And as I still look at these photos it is a big: nope. However if you are extremely adventurous and want to see what it is like to be Bear Grylls on his TV show Man Vs. Wild, then by all means feel free to have a sample! 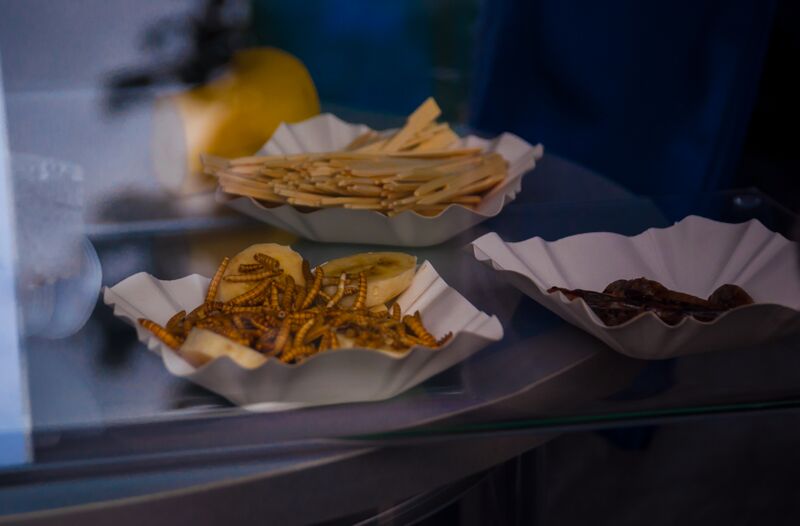 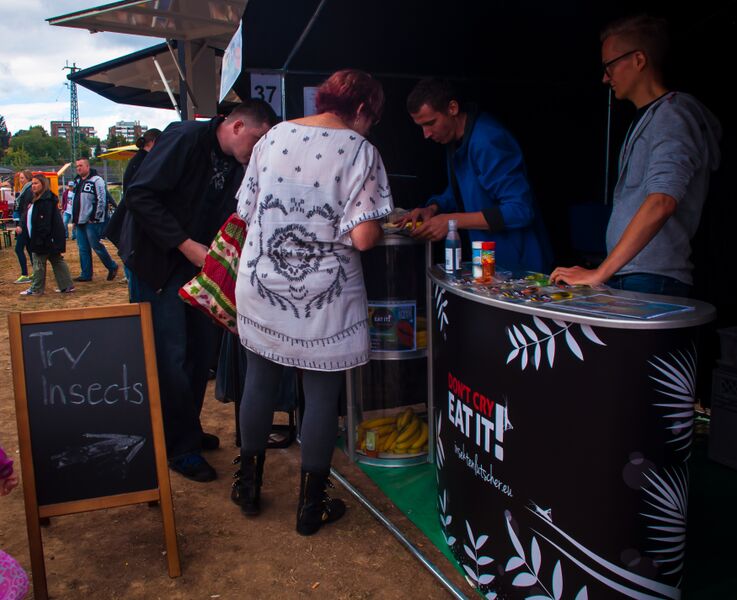 Then a complete contrast to eating insects, it was now time to check out the vegan burger stand that was in a cool silver vintage bus. Their very clever name is ‘Food V(eg)an’ and they are from Taunusstein, which is a town just North of Wiesbaden. I ordered the ‘Hipster Burger’ which had fresh bread, vegan patty, lettuce, tomato, onion and BBQ sauce. It was so good I think even a meat lover would love it! They also offered a ‘Corleone Burger’, ‘Gandhi Burger’ and scrumptious sweet potato fries. 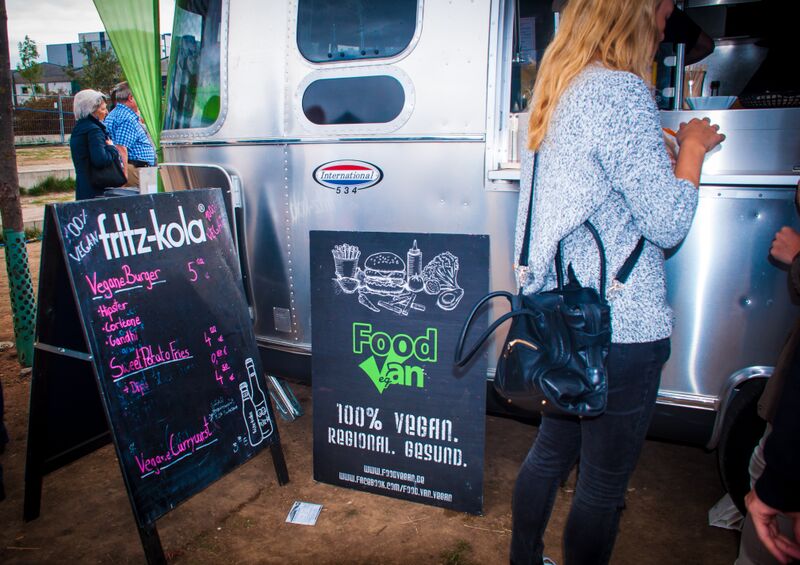 © Gemma
It was time to sit down and eat my ‘Hipster Burger’! The fest had nice tables set up in the middle so you could rest for a little bit. All this eating was very tiring. 😉

One of the biggest ‘wow factor’ stands was the impressive ‘Peanut Butter Bacon Burger’. I hope to not disappoint, but I did not try that. However it must have been a great combination because the stand constantly had a line of people ready to get their PB-and-B-Burger on. 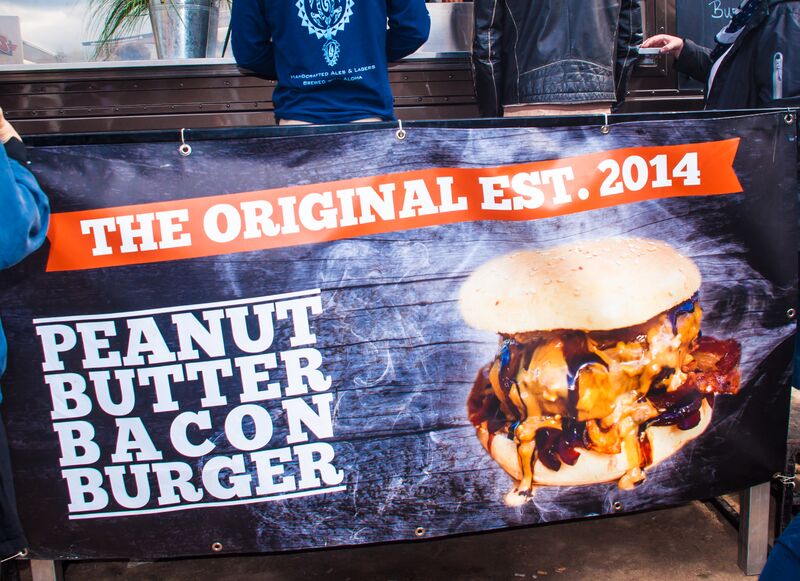 © Gemma
If you fancied a cocktail, you could drink it in this very cool double decker English bus! 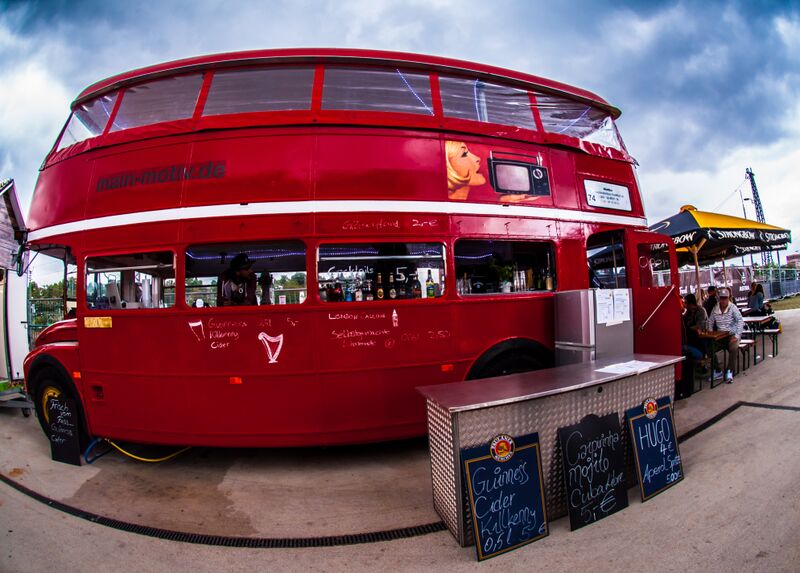 We were about to leave and then we bumped into some friends who said we *must* try the Italian rice balls. Okay twist my arm, I listened to their suggestion. Ran by a really nice Italian man named Francesco, the stand was called the ‘Food Agent’. I ordered the spinach mozzarella rice ball. How was it you ask? Well if loving these rice balls is wrong then I don’t ever want to be right. It tasted like a big, softer mozzarella stick filled with savory rice and spinach. If you are curious to try this at home I found a recipe online: http://www.foodnetwork.com/recipes/rice-balls-recipe.html 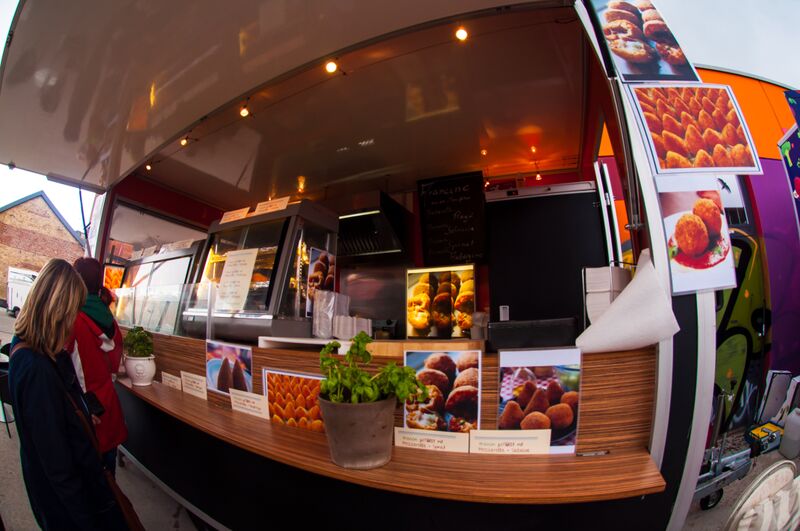 © Gemma
This fest travels the area so be sure to bring your appetite and check it out! Here is the facebook page to follow: https://www.facebook.com/StreetFoodMarketRheinMain