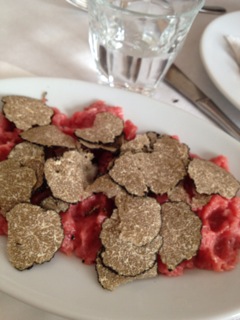 We smell autumn first before its colors can be seen. We then feel its coolness in the morning or evening air. Finally, we hear its crunch in crisp apples or crinkly leaves.

The prizes of autumn come from the earth: apples, pumpkins, mushrooms, nuts and even truffles (no, not the rich chocolate confection, but the kind that are hunted and highly valued).

Truffles are considered the crown jewels of culinary culture. A rare find, truffles can be quite expensive. A truffle that weighs just an itty bitty gram can cost up to $250. They grow in special conditions, blooming only four months out of the year during autumn. Kings throughout history requested them as their last meal. Restaurants are ensured a winning dish when they feature its flavor. True foodies covet the truffle.

The truffle’s taste has recently expanded into the tourism industry, with individuals, honeymooners, families and even tour groups signing up to “hunt” for them in hopes of sampling fresh harvests of this delicate delight.

It’s surprising that our truffle guide Guiseppe Marengo, “The Truffle Hunter,” does not like to eat truffles. When we sample the one we just had successfully “hunted,” Marengo politely moves his plate as far away as possible — happily in my direction. I oblige his refusal by eating his portion.

Booking.com
When shaved fresh, truffles open up flavors of cream, garlic and wood simultaneously into a dish. The earth in my mouth feels as rich as the earth that surrounds the hills of Alba, where I came for the sole purpose of hunting truffles.
The locals around Alba, a small town in northern Italy in the provence of Cueno, claim the area has produced the world’s best truffles for the last several centuries. Every November, Alba hosts a truffle fair, highlighting the ingredient, in addition to other gourmet food and wine finds.

On the “hunt,” Marengo teaches me that people cannot cultivate or “garden” truffles.

“Only the land can give birth to them,” Marengo said.

Germination occurs over a 10 month timeframe. Then, in the autumn, usually after a generous rain storm, a truffle begins to bloom three to four inches below the surface of the soil. Slowly, they become more pungent. Within five to seven days, the smell is traceable — a navigation device for the hunters: pigs, dogs and some trained humans.
Marengo’s grandfather taught him the art of hunting. He has been shown the secret locations where truffles tend to grow the best. Oak, birch, hazel and pine trees tend to create the best garden bed for truffles to grow. Marengo can sense these prolific, hidden truffle areas like a sailor can sense the North Star. He examines the woods as if reading a nautical map and follows his compass accordingly. 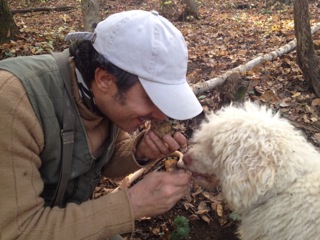 His “first mate” is Luna, a floppy white mop haired dog. Frisky and loyal, Luna follows Marengo’s unique directions, spoken in an old dialect that sounds to my ears like an ancient chant. She leaps, bounds, circles back, searches, smells and then returns to Marengo. The hunter and his dog share a Hollywood film-like bond, which rivals the truffle for appreciation. As we “hunt,” Luna’s passion for the trail and her owner — and Marengo’s gratitude and connection to her — feels magical. We are all grateful just to be moving in the woods during this special season, knowing the truffles may possibly be slumbering underneath our big boots.

Our thankfulness deepens when Luna locates a truffle and begins pawing and unburying it with her front paws. Marengo carves out the white truffle — the size of a large walnut and the color of aged, yellow wallpaper. He holds up the truffle delicately, blowing dirt off its surface as if it were gold. We all feel as if we found a treasure. 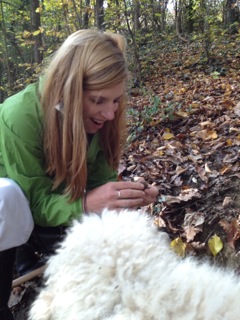 Truffle hunting feels luxuriously delicious, making an observing tourist more of a participant in a secret of the land she visits. Eating them tastes like a slice of heaven. You just can’t help but feel divine to eat something you took out of the earth yourself. It is what makes autumn magical.

Traditional truffle hunts occur October through December. For further information, or to book a tour of your own, contact Guiseppe Marengo and Giacomo Sperone at giasper@alice.it or or beppe@ilprofumodellanotte.eu, or call +39-335-6516373.