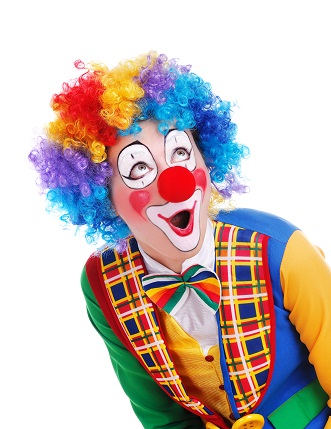 It’s that dreary time of year when one is expected to make resolutions and then, preposterously, stick to them. Take it from a man whose irresolution is legendary among family and colleagues, most New Year’s resolutions are not worth the scrap paper they are scribbled on. Lose weight. Get married. Save money. Find a new job. You might as well resolve to search out the Seven Cities of Cibola or capture an Australian bunyip.

I have to admit, despite my innate love of shillyshallying, there was one time when my New Year’s resolution was acted upon with determination and then actually provided me with measurable benefits.

It happened back in those halcyon days when I first joined the circus as a clown. I was surrounded by veteran funsters who had personally known, and worked with, the likes of Charlie Chaplin, Buster Keaton and even Slivers Oakley – a tragic figure in clown history, hailed as the most popular clown of the early Twentieth Century, who blew his brains out when the crowds stopped laughing at his shenanigans. Working with such wonderful examples of buffoonery, my mind began to teem with comic ideas. But when I tried to execute my brainstorms in front of the audience I was met with a sea of funereal faces. The crowds acted as if I were offering them leper-flavored popcorn.

Was I going to be another Slivers Oakley?

I couldn’t figure out what was wrong, until one of the clowns brought his clunky home-movie camera into clown alley and began filming some of our gags. When I saw myself in these grainy flickers I felt sick to my stomach. I moved like a rag doll and emoted like a zombie. No wonder the audience couldn’t figure me out; my pantomime skills were atrocious.

Slowly I formed a resolution to better my skills as a mime, and by the time the New Year rolled around I had refused a contract for another season on the road with Ringling Brothers and instead enrolled in the Studio Busqueda de Pantomima-Teatro in Patzcuaro, Michoacan, Mexico. It is still run today by the original pantomime Maestro, Sigfrido Aguilar. He had taught a brief course of pantomime at the Ringling Clown College in Venice, Florida, while I attended there, and had invited any of us interested to attend his academy in Mexico after the season was over. So I went with one other fellow clown, nicknamed Little Guy for his diminutive stature. Sigfrido’s fee was only a few hundred dollars, and the living was el cheapo-cheapo, to say the least. I remember a basket of fruit, bananas, oranges, guavas, papaya and mangoes, as costing much less than a dollar. Little Guy and I shared a two-bedroom adobe house, with indoor plumbing but no central heating, renting it for about twenty dollars a month. To paraphrase from “Porgie and Bess”, the living was easy.

Patzcuaro is in south central Mexico, on the shores of Lake Patzcuaro. Back in 1973 the residents fished the lake heavily for minnows called pez blanco; these they salted and laid out on nets in the sun to dry, then bagged them by the hundreds to sell to the local households, where they were noshed on like Gringo potato chips. Due to contamination from untreated sewage, the tasty pez blanco are no longer harvested or eaten in Patzcuaro. The tap water was not safe to drink, so Little Guy and I subsisted on large volumes of an apple-flavored mineral water called Sidral Mundet. Sigfrido advised us to drink the local cerveza as being cheaper and healthier on our teeth, but I, of course, would not let tainted alcohol pass my lips and Little Guy broke out in bright red splotches when he tried the local brew – so we stuck to the sticky sweet Sidral, and somehow managed to keep all our teeth into a ripe old age.

We went each day to the Casa de los Once Patios, where Sigfrido had his studio, for several hours of pantomime exercises – tedious sessions of feeling the walls of an invisible box, walking against the wind, or hauling on an imaginary rope. Little Guy and I chaffed at the bit, to put it mildly, with this hum-drum drilling, and soon we were ad-libbing insouciantly, much to the amusement of Sigfrido. When doing the rope exercise we would ‘accidentally’ tie hangman’s knots and proceed to execute each other. Or while walking against the wind we would snatch newspapers out of the cyclone to read, or a bit of food to munch on. Sigfrido laughingly finally gave up on drilling us in strict mime exercises. Instead, we started to have group brainstorming sessions. They took the form of “What if” story sessions. What if Little Guy is a doctor, Sigfrido is his drunken assistant, and I’m a patient with hiccups? What if Sigfrido is a poor taco seller who eats all his own wares and then experiences flatulence? We’d act these scenarios out in complete silence, quietly suggesting bits of business to each other, until we had a complete ten-minute pantomime scene ready to go. Slowly, by watching and learning from the way Sigfrido moved his body and face, I began to incorporate the classical mime movements into my own clown work. It was genial work, and soon we three had a solid body of gags to take on the road as a two-hour show. We called ourselves Los Payasos Educados, “The Educated Clowns.”

We were playing the Guadalajara Opera House to SRO houses; Sigfrido was talking of taking us on a tour of all of South America. The show biz world was definitely my oyster.

And then I came down with amoebic dysentery.

The messy details needn’t bother us here. Suffice it to say I dwindled into something akin to the sideshow’s human skeleton before finally giving up and returning to the ancestral home in Minneapolis, Minnesota, where doctors stuffed me with antibiotics and my mother stuffed me with lefse, ham salad, pickled herring, and mountains of mashed potatoes with gravy.

When I was finally well enough to start looking for work Little Guy called me. It seems that Little Guy hadn’t the heart to stay with Sigfrido after I was gone and had obtained a cushy berth as an Advance Clown with Ringling Brothers, performing ahead of the show at hospitals and schools, also yucking it up at radio and TV stations. Hours were short and the pay was good. He wondered if I might like to join him, to become the Advance Clown team of T.J. Tatters & Dusty. I was Dusty.

We were a smash from the get-go. Kids loved our pantomime routines, lifted directly from our study with Sigfrido. Adults compared us to Laurel and Hardy. Our future as a comedy team looked rosy indeed. My bank account, long considered too anemic to survive another deduction, swelled like a circus balloon.

But you know the old saying: A fool and his fame are soon parted. While recuperating from dysentery I had set my heart on serving a mission, although I hadn’t a dime in the bank and my parents, both Catholic, told me straight up that they would never support such nonsense. Still, I had put in my papers and kept my LDS Bishop informed of my continuing interest. Just as the first nation-wide tour of the new comedy sensation T.J. Tatters & Dusty was drawing to a close, the fateful letter arrived from Salt Lake City.

I was called to preach the gospel in the Kingdom of Thailand.

Where, I had to ask myself, is THAT?

Little Guy assumed I would not go, seeing as we were becoming a show biz item. I owed him much, but I owed Someone Else even more. Saying good bye to Little Guy for two years hurt almost as much as the gamma globulin shot I got in the keister a month later on my way to the Language Training Mission at BYU-Hawaii. While struggling with the Thai language in Hawaii I received a curious letter from my future Mission President in Bangkok; he asked me if it would be possible for me to bring my clown trunk along to Thailand.

So . . . how did my mission go? What happened after I got back? Did I resume my stellar rise under the big top? These questions, and many more, have fascinating answers.

But I’ve made a New Year’s resolution to sell the rest of my life story to National Geographic.

About the author:
Tim Torkildson now lives in Provo, Utah, where he is an online web editor for sites such as White Sand Tourist Services.