I’m standing outside a Celtic longhouse watching the Celtic way to make and hold fire. Herr Klaus Zahneisen is a docent at the Keltenpark Otzenhausen.

He shows us the special tree fungus ancient Celts smoldered into charcoal to use as a base fire material. He strikes a spark on it with a flint and iron. After that, he places the ember in a bed of straw and blows on it as it smokes and finally lights into a fire. There are cheers all around. 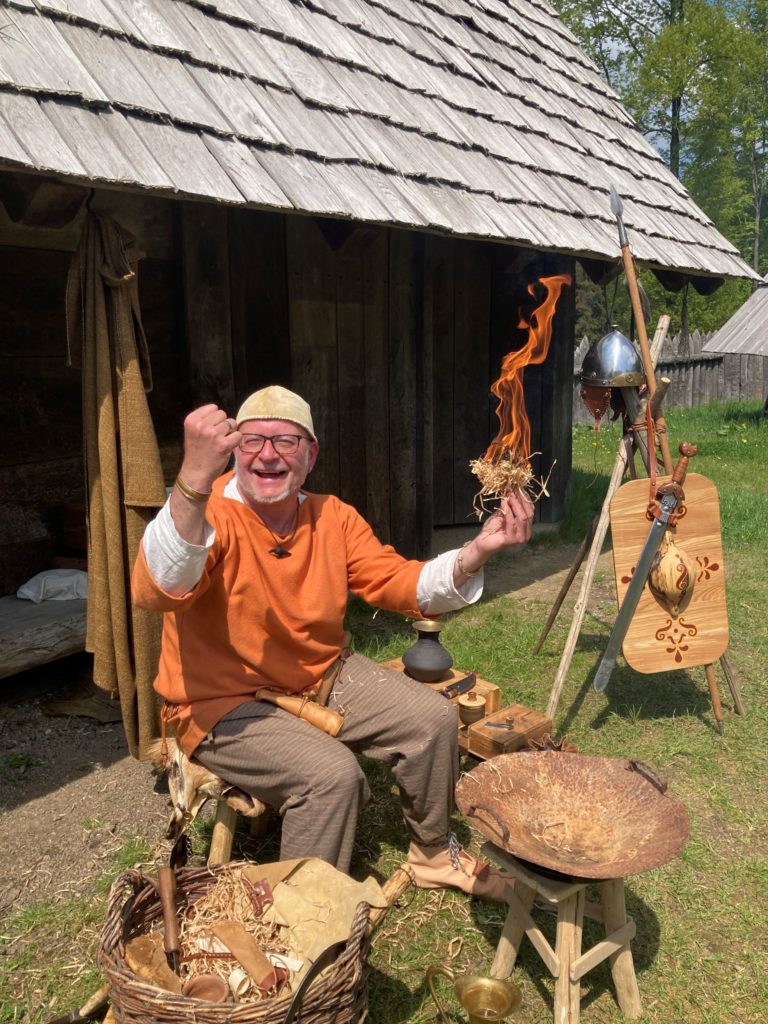 Zahneisen is dressed in a bright orange tunic shirt, synched at his waist over thin brown pants. His leather shoes have pointed toes. His leather hat has been hand-stitched at the edges. He also wears two gold armbands on his wrists and a black raven pendant on a leather thong around his neck.

“In movies the Celts always wear brown, but they actually loved color,” he says.

He shows us the many skeins of wool yarn – dyed here in the old Celtic ways in bright blues, reds, and oranges. They used tree leaves for their favorite bright yellow. And further added iron to the pot to bring it to green. Using small samples of ancient cloth, the team has recreated intricately patterned woven fabrics and glass beads. 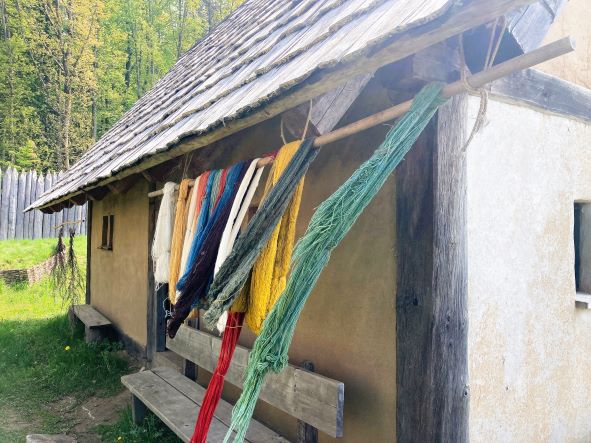 The Keltenpark at Otzenhausen is a prime example of experimental archaeology. Using what they have discovered from digs in the area, they have recreated a small Celtic village that can teach us a lot about the Celtic daily life of 400 BC. At that time, the Celtic culture dominated the Rhineland and Saarland parts of Germany.

The small homes and storerooms were built by hand using only the skills and tools available to people living here at the beginning of the common era. The detail is apparent. Each building has exposed timber-framing and walls filled with woven sticks and covered in clay plaster (wattle and daub).

In the roofs are hundreds of hand-carved wooden pegs holding shingles down under the thatch. Part of the archaeology process here is maintaining the structures in a cycle throughout the years.

My son tries his hand at shaving wood with a traditional iron tool and a seated bench. My daughter pokes at the village’s central fire, spreading coals under the grill.

In terms of technology and lifestyle, the village doesn’t feel too different from early American settlement re-creations we’ve visited. It feels similar to places like Plimoth Plantation in Massachusetts, but the Celts lived 2000 years before those earliest colonists. 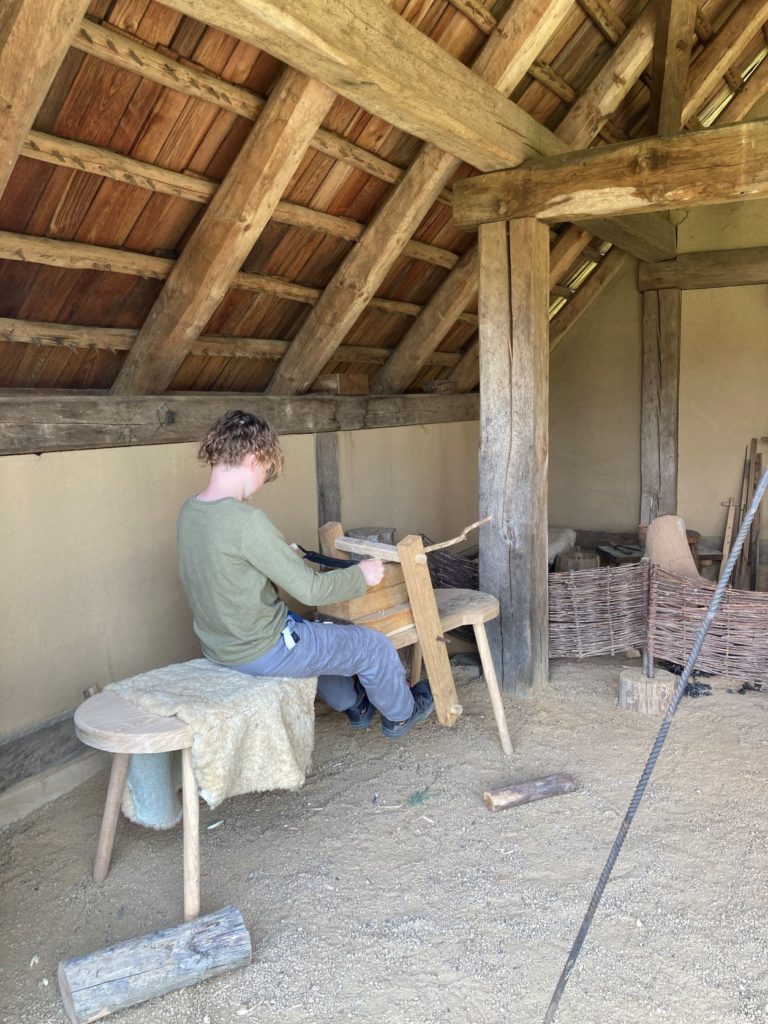 Though small, the village accurately represents rural life during the Celtic heyday before Roman occupation. There would have been many similar villages dotting this area around the base of the Dollberg mountain.

Atop the mountain was one of the largest Celtic fort towns of the era. From about 500BC – 50BC the triangular hilltop ringwall on Dollberg was occupied and expanded to eventually be about 45 acres large. It was huge for the time; big enough to hold a large trading town. In some places, the walls were 40 meters thick and 10 meters high.

A 4km long walking trail leads up to the Celtic Ringwall (erroneously called the wall of the Huns by excavators in the 1800s). Along the route are information boards describing the archaeology of the area. It was a good place for a fortified town; ice age geology had deposited tons of working-sized stones. And there is an abundance of iron ore. 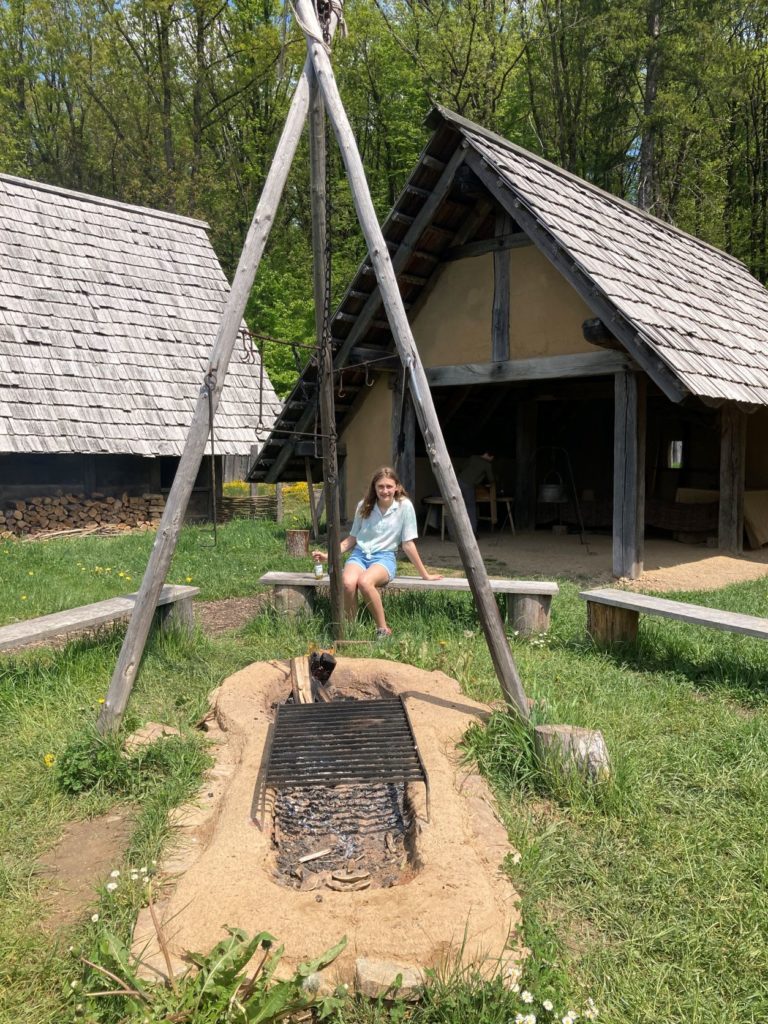 There Are Still Mysteries

Back down in the village, the fire is lit in the center of the village. The iron smelting workshop is displaying how the Celts would have worked with the metal. The oven workshop can show baking or pottery making.

On any one weekend day, there may be one or many reenactors like Zahneisen. A graphic designer by trade, Zahneisen became interested in his own Celtic heritage as a child.

“That is the big question mark,” he says, pointing at the next display.

We are looking at a child-sized wood carving that depicts two faces; one atop the other. It has been placed on a small rise in the back corner of the village. At the base is a minimal shrine – a bowl for offerings, some incense, an animal skull.

“We find the two heads carved in this area – maybe they mean something. Other places you read of Druids. But we don’t have that here. It is hard to know. So, that is the question mark. ” While the Celtic belief system is still a mystery, there is a lot more to the Celts that we can learn about here at the Keltenpark Otzenhausen. 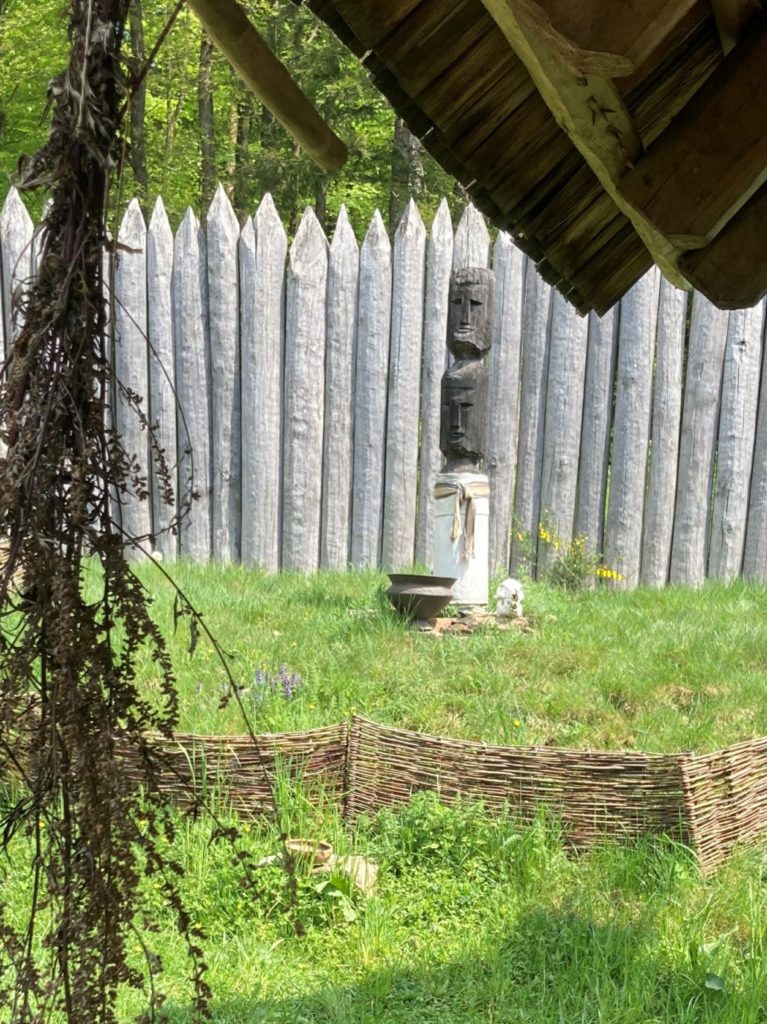 Details for your visit

The Keltenpark is open 10am – 6pm on Saturday and Sunday from March to October. Admission is €2,50 for adults and €1,50 for children. The ringwall and hiking area are freely open 24 hours daily. It is a roughly 1-hour drive from Kaiserslautern.

This summer season, the Keltenpark is also hosting many special event weekends with hands-on classes in pottery, ironwork, basketry, cooking, and more. There are two reenactment weekends featuring the Roman 14th legion attempting to take over the village (July 30 -31/ Aug 20-21).

In addition, on most open days there is a guided tour of the village at 3pm, and guided hikes of the ringwall on Saturdays at 2pm. While events are held in German, many of the park’s docents speak English.

Note that construction of a new visitor center and museum is ongoing, so entry and parking are via the ‘rear’ gate to the village on Zum Mutterheim road.