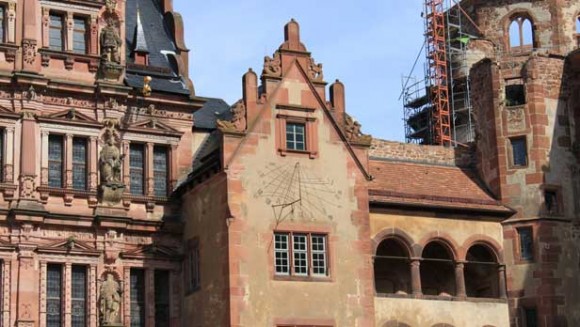 The city of Heidelberg is famous for its university, fountains, memorials, and Old Town (Altstadt), but the most famous landmark is Heidelberg Castle. The castle was voted number one of the top 100 sights in Germany in a German National Tourist Board online survey of 18,000 participants.

Construction on the castle started in about 1210 A.D. It has been destroyed several times by war and was hit hard by lightning twice — but still stands magnificently on the hill known as Koenigstuhl or Königstuhl (meaning “King’s Chair and pronounced “KUH-nig-stool”). Mark Twain visited the castle and described its wonder in Tramp Abroad, adding “misfortune has done for this old tower what it has done for the human character sometimes – improved it.”

There is a lot to see in Heidelberg, but my focus was the castle. My GPS recognized the entry “Heidelberg Castle,” and I was off.  Heidelberg is only an hour away from either Wiesbaden or K-town and a 1 1/2 hour drive from Stuttgart According to Wikipedia, Heidelberg Castle is “among the most important renaissance structures north of the Alps.” The courtyard is magnificent and the views of the Altstadt (Old Town), the Alte Brücke (Old Bridge) and the Neckar River are stunning. 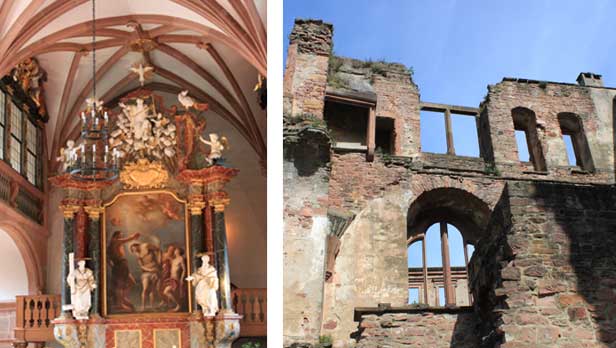 This collection of over 20.000 objects representing the rich history of medical sciences, especially of pharmacy, is supposed to be the largest anywhere, spanning 2,000 years of pharmaceutical history. In the museum you can see samples of the medications, the pharmacist’s shop, samples of laboratory equipment, pharmaceutical symbols, vessels, and mortars, scales and weights that have been used over the millenia.

Booking.com
According to the information on the City of Heidleberg’s website, the first “big barrel” in the cellar of Heidelberg Castle was built in 1591. But today’s bigger attraction is the second barrel built in 1751 which is even larger. More than nine yards long and eight yards high, it has a capacity of 55,345 gallons of wine. In former times, the wine growers had to pay their share of taxes by delivering wine to the castle.

** Both the Apothecary Museum and the wine barrels are included in the cost of your admission to Heidelberg Castle.

There are four stations: Kornmarkt (in the Altstadt, close to the Neckar River), Castle (or Schloss), Molkenkur, and Königstuhl. I only used the Kornmarkt and Schloss stops. This is a cool way to descend from the castle to the Altstadt and is a short ride of about one minute. The railway departs about every 10 minutes and is included in the price of your castle entry ticket or Combi-Ticket.

The Altstadt and the Alte Brücke (Old Bridge)

This is a great place to stroll, have a coffee, enjoy lunch or dinner or do a little shopping. The atmosphere is friendly and comfortable. Heidelberg is a university town, so there are a lot of students riding bicycles. If you visit the castle, it just makes sense to use the funicular railway and visit the Heidelberg Altstadt.

This event is done three times per year to commemorate the destruction of the city and the castle by the French in 1693. In 2012, illuminations were scheduled for 02 Jun, 14 Jul and 01 Sep. During the ceremony, which normally starts about 10:15, the walls are drenched in red lights, simulating destructive fires which then gives way to an impressive fireworks display.

You can purchase a “Combi-Ticket” for 5 Euro which includes the castle courtyard, the Bergbahn (funicular railway), the Apothecary Museum, and the giant wine barrels. You can get a guided tour for an additional 4 Euro per person or 10 Euro per family. An audioguide is available for 4 Euro.

For more information, visit the official city of Heidelberg website, which includes other sightseeing information for Heidelberg. 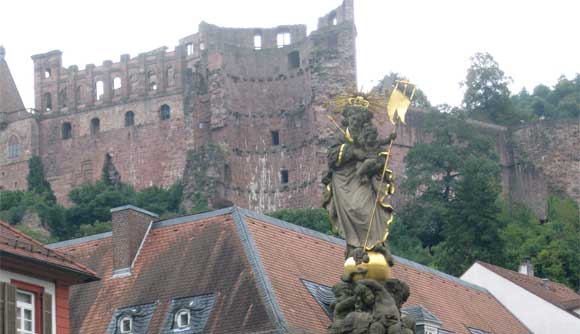