In the summer of 2010, a small group of women met to talk about playing roller derby. They did not have enough skaters for a team, someone to train them or an idea where to start. However, they had a dream and roller skates. They named their team the K-Town Derby Girls and went to work developing their skills on the track. They taught themselves how to skate and hit as well as they began to study the rules.

What is Roller Derby

Roller derby is a full contact sport played on quad roller skates. The objectives of roller derby are relatively simple. Each team fields a single point scoring skater (“jammer”) whose object is to lap as many opposing skaters as they can. The remaining skaters (“blockers”) work to block the opposing Jammer while also trying to clear a path for their own.

Roller Girls of the Apocalypse (RGA)

The K-Town Derby Girls decided their league needed a new look before their first regulation match in September 2011, and the Roller Girls of the Apocalypse (RGA) were born. RGA grew rapidly in both size and skill. They were accepted as a Women’s Flat Track Derby Association (WFTDA) apprentice league in 2012. WFTDA is the international governing body of women’s flat track derby. RGA worked hard to achieve their full WFTDA status by March 2014. 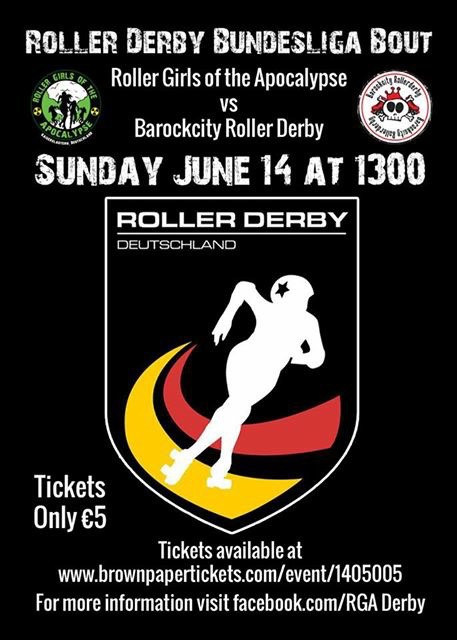 RGA will be hosting a tournament with skaters from all over Europe to celebrate their fifth birthday on the weekend of June 13-14. On Sunday the 14  at 1 p.m., RGA will play Barockcity Roller Derby in their second Bundesliga match of the season. Tickets are 5€ and are available online or at the door. For tickets and other information visit RGA’s Facebook page. The venue is Unisport and is located at 28 Paul-Ehrlich Strasse, Kaiserslautern. Come help celebrate all of RGA’s accomplishments with food, fun and derby!