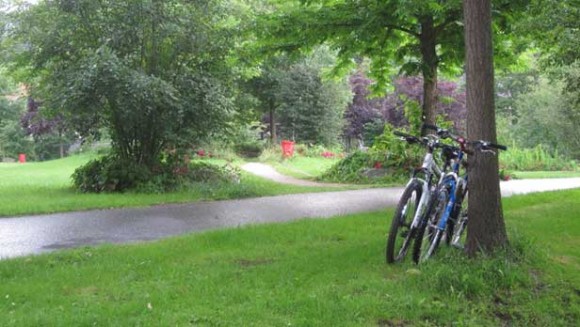 story and photos by Susan Melnyk

There are no shortage of bike paths in Germany, but finding them can be a little difficult.  Here are a few tips and tricks to help you find and follow these terrific paths:

Groomed bike paths connect most towns and cities in Germany and follow alongside the major rivers. The City of Kaiserslautern has a great page with a list of bike paths in the area.  One of our favorite is the Lautertal path, which takes you from Kaiserslautern, through Otterberg to Lauterecken.  Along the way, there are several other paths that you can pick up.  All of the path crossroads are marked with signage like that below, including the distance to the next town (in kilometers).

Starting at the Gartenschau (garden show) in Kaiserslautern, you’ll follow these signs along the way.

The path is paved about 90% of the time and completely off the road, except at certain street crossings.  It follows the railway path in several places (though several feet away), so just be sure to keep the kids off the tracks, since passenger trains are common in Germany.

There are towns all along the path, giving you the perfect opportunity to stop into a bakery or restaurant for a snack.  If you wear yourself out before you start the trek back, just jump on the train back to your starting point.  Bikes are allowed on the train cars that have the red bicycle graphic on the side.

Rain is a common occurrence in Germany, so it’s not a bad idea to pack a light rain jacket for the ride.  If you get caught in a downpour, just sneak under a thick canopy of trees until it subsides.  It’s all part of the fun!

Don’t forget your camera, as the countryside and houses along the way are beautiful.

Download the pdf map of the Lautertal trail at the bottom of the Kaiserslautern City page here.  It’ll give you a great sense of where you will be heading.