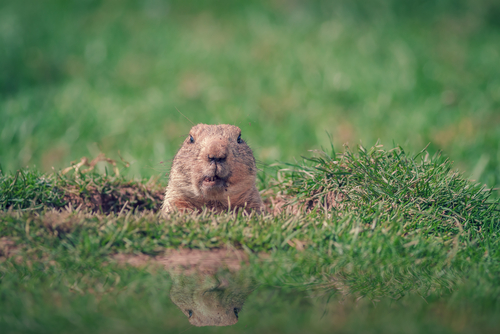 As a young boy in Minnesota, winter was enchantment incarnate. I could eat my Cream of Wheat in the morning while watching rubicund cardinals squabble with indignant blue jays for seeds at the birdfeeder in the backyard; the drab house sparrows, like lawyers, got the majority of the pickings by showing up and doing nothing, just waiting for the antagonists to fritter away and scatter their inheritance. Our gutters were superannuated, more like rusty sieves, and the icicles hung down treacherously, some of them nearly six feet, ready to impale the brazen child (like me) who dared molest them with fallen elm branches. December and January brought generous amounts of sturdy snow, the kind that could be molded into traditional snowmen or packed together for a snow fort; I felt smugly invulnerable inside my backyard snow fort, and bade defiance to the elements, and especially to my sisters when they dared approach – I had a ready pile of snowballs to launch at their insolent hooded heads. Nearby Van Cleve Park, named after Charlotte Ouisconsin Van Cleve, who was born somewhere around there in the woods way back in 1819, tantalized me with an ice rink AND a warming house; you could actually skate your fool head off until chilblains set in, and then go inside a nice warm building, redolent of wet wool socks, and shoot the breeze with your pals as long as you wanted. The attendant was always a University of Minnesota student who needed the miserly stipend to survive, and he always had a stock of cheap cocoa and hot water ready to make us a free mug of something that wasn’t quite hot chocolate and wasn’t quite muddy and sweetened ditch water, but lay somewhere in between. If you let it cool a thick black skin would form on the top of your mug, which tasted great; then you could toss the watery dregs away.

Until it got to be February, and then, like all children everywhere, I grew heavily bored with the same old thing and bitterly reproached my mother and father (in my imagination) for living in such a frigid and godforsaken land when we could be playing in the surf down in Florida. To me, as a boy, February was chapped lips and broken-down galoshes. The cheap zippers in my black rubber galoshes were played out by Ground Hog Day. The only way to get them to work was to rub a bar of laundry soap up and down the interlocking teeth, and that was merely a stopgap measure – by the end of February the galoshes would be utterly useless, their unzippered sides flapping listlessly like the wings of a dime store rubber Halloween bat.

Thank goodness for February holidays. I am convinced that is the only thing that kept all of us, children and adults alike, from running melancholy mad with cabin fever. My parents had never heard of Groundhog Day before I started grade school. But once I started bringing home coloring pages of Punxsitawney Phil they perked right up and anxiously awaited the results of his inaugural appearance. At least it was something to TALK about! My grade school teachers spent what I thought to be an inordinate amount of time having us study and draw groundhogs – what was the big deal? They were ugly and basically useless creatures, foul-tempered to boot. But when I grew up and became a teacher myself I understood the desperate shifts teachers are forced into when the February doldrums hit and you don’t feel like spending much time putting together lesson plans. Just draw another groundhog, Billy, and leave me alone.

On February 12th we celebrated Lincoln’s birthday, and on the 22nd Washington’s birthday with a plethora of stovepipe hats made out of black construction paper, along with the vicarious pleasure of imagining little George hatcheting an innocent cherry tree.

And of course Valentine’s Day on February 14th stuck out like a sore thumb, at least for a boy like me who had absolutely no use for girls. I already had two younger sisters who were the bane of my existence. My mother was a girl of some kind, big and overbearing and making way too many tuna fish casseroles. Although I knew nothing about the men from Mars and women from Venus thing I intuited that females were completely alien creatures bent on getting me in trouble with the teacher by tattling on me without mercy. They were to be avoided, not pursued with pastel poesy on paper.

Somehow or other I endured the month of February as a young boy, and welcomed March as a shipwrecked sailor welcomes a rescue party, even though February 28 (or 29) and March 1 were virtually indistinguishable. The calendar said it was March, and by granny it was going to get warmer and more interesting, even if I had to wait another six weeks for it to happen!

Author profile:
Tim Torkildson now lives in Provo, Utah, where he is an online web editor for sites such as White Sand Tourist Services.